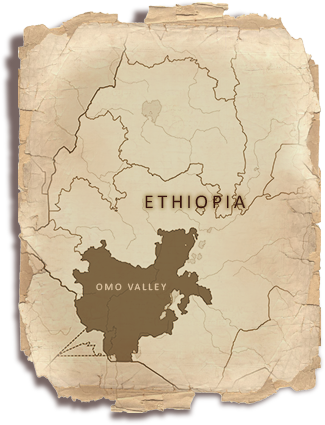 Extraordinary cultural integrity, that there is more than a smattering of truth in the assertion that as recently as 50 years ago the PEOPLE OF SOUTH OMO were scarcely aware that such an entity as Ethiopia existed.

SOUTH OMO is literally fantastic. Descending from the green, urbane highlands into the low-lying plains of South Omo feels like a journey not merely through space, but also through time, as one enters the vast and thinly populated badlands that divide the mountainous centre of Ethiopia from its counterpart in Kenya. Like much of neighboring northern Kenya, South Omo is a close as one can come to an Africa untouched by outside influences. The culturally diverse, immaculately colorful and defiantly traditionalist agro-pastoralists who inhabit the region seem to occupy a physical and psychic landscape little different to that of their nomadic ancestors.

This is Africa as it once was, or as some might still imagine it to be, and its mere existence is at once wonderful and scarcely credible. It seems facile to label South Omo as a living museum. Yet in many senses, that is exactly what it is.
Four of Africa’s major linguistic groups are represented in the region. All in all, depending on where one draws the lines, as many as two-dozen different tribes occupy SOUTH OMO, some numbering tens of thousands, others no more that 500, each one of them culturally unique.

The most renowned of the Omotic-speakers are the MURSI, famed for their practice of inserting large clay plates behind the lower lips of their women. Other important groups of South Omo include the HAMER-BENA, the KARO and the ARI, whose cultures and quirks of adornment-body scarring, body painting. Romanticize or condemn it, South Omo is there, it is fascinating, and it is utterly unique.

The Different Tribes of Omo Valley

For further information about location and traditions go into the link: BLOG 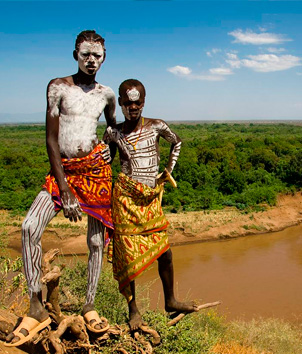 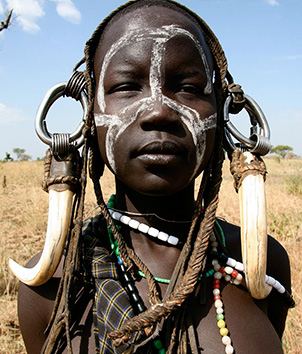 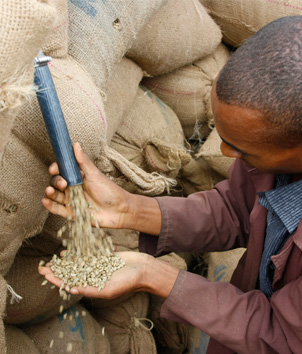 Ethiopia’s economy is dominated by subsistence agriculture. Coffee accounts for 55% of Ethiopia’s exports. But, despite the international renown for its coffee.

Geographically Ethiopia is stunning. The landscape is dominated by the dramatic Ethiopian Highlands with peaks of 4000m or higher. The country is bisected by the Rift Valley, which starts at the Red Sea, to the North East, and continues south to Mozambique in southern Africa.

The two major mountain ranges are the Simien Mountains (a World Heritage Site), in the north of the country; and the Bale Mountains to the east of the Rift Valley, in the southern highlands.

The major rivers include the Blue Nile, in the northwest; and the Baro to the west (Gambella), which feeds the White Nile in Uganda, and ultimately joins the Blue Nile in Sudan. The Wabe Shebelle courses through southeast from the Bale Mountains into Somalia. The Omo River starts in the western highlands and feeds Lake Turkana on the Kenyan border. The Awash feeds a series of desert lakes to the east of the country near the Djibouti border.

Given Ethiopia’s vast variety of landscape, from highlands to desert, it naturally follows that climates are also very varied: the eastern lowlands and the far south are dry and hot.

The western lowlands are moist and hot. The Rift Valley to the south is temperate to hot and seasonally moist.

Therefore, it is possible to experience frost, and even snow in the mountains, or dry soaring temperatures in the desert all in one trip.